Tidbits from Then and Now 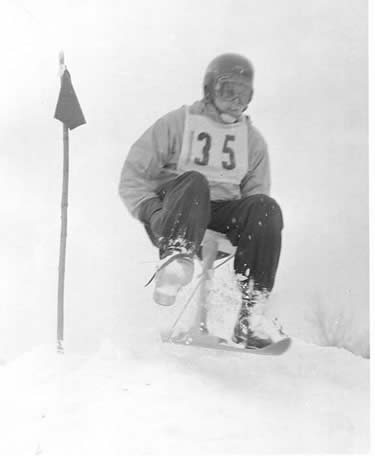 The snow has come and the skis are out. The ski resorts are echoing with glee.

Think of the progress of the ski. Some young men bent slats of wood and tied them to their feet. The progress wasn't the greatest, but it was the enjoyment of the accomplishment that paid off.

Sixty years ago found wooden skis, held on by a strap across your boot, [not a ski boot either]. Over the years they developed into an enameled wood to fiberglass to, who knows what! The ski boot developed along with it and is now attached with special bindings. The lightweight cross-country ski made an appearance. Today the challenge is a specialty called snowboarding with a single, large, specially designed board. As far as I can see it is quite dangerous, but as usual a thrilling feat for the rider.[I'm not about to try it! Now, this week has introduced a new type of ski. It's called ski boarding with really short skis [at least both feet have a ski!] and it seems to have really caught on.

Roller skates have done about the same thing, from rollers you hitched to your shoes to shoes with rollers. Then roller blades, so called because the rollers are in a row like a blade, to skateboards on which both feet ride. This can be a competitive sport with all kinds of tricks mastered by the rider.

Ice skates also developed from hitching blades to your shoes to shoes with blades on them. Not much of a development you say? Try these: figure skates, hockey skates, double edge skates [for the little beginners]. So, the main development is in the style of the blade.

Remember trying to do a figure eight, skate backwards or even skate on one foot and act like a swan? The competitions now are breathtaking to behold.

How many remember the jack jumper?